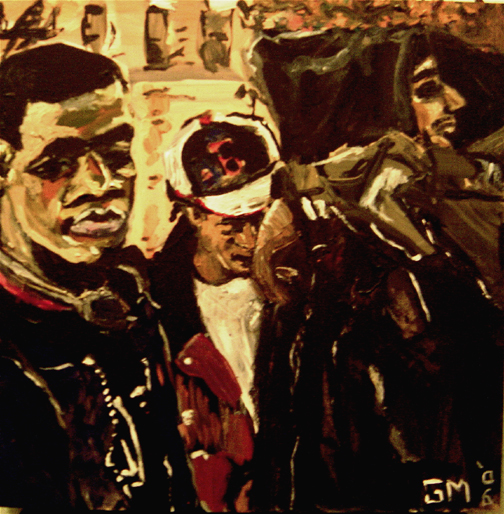 In her film ‘corps étranger’, Mona Hatoum brings us, with a special medical camera, literally inside her body. We enter more or less all of her orifices as an eye, and we see her mysterious, vulnerable, gross, beautiful, pulsing interior territories.

What a statement this film is (as I see it), about the bodies of women and about the bodies of the colonized (she is of Palestinian origin)- and not, by the way, unrelated to the current and ongoing waves of tragic murders of Blacks in America by police- these bodies subject to surveillance and suspicion,  unlawful imprisonment, beatings, rape, murder, dehumanizing desire, rage, incomprehension, assumption, a range of questionable scholarship, debate, and regulation. All this and yet you will never see these pulsing pink opalescent passages, the pools of bilge and the blue capillaries, never hear the resounding, insistent- and yes, miraculous, awesome-passage of blood and air, unless, as Hatoum does, she invites you in, unless she decides to radically risk herself by taking you there and showing it to you.

Extraordinary- Andy Warhol interviewed in 1966. He is asked whether he cares what people think of him- that “they” have an opinion about him good or bad, and he literally refuses to answer. He tells the interviewer, “you tell me what to say and I’ll just repeat what you say”. He even suggests that the rest of the interview might proceed very well in this manner, with the television interviewer supplying both the questions and the answers, with Warhol merely mimicking the answers he provides. It strikes me as a profound (and yes, also playful) rejection of the artist’s prescribed role as exalted ego and anointed producer of cultural signifiers. What if the artist himself refuses to play along? And what if his modus operandi is far more consciously subversive than Warhol’s is commonly thought to be (his behavior often written off as whim, eccentricity, lack of seriousness)…The unacknowledged and unplumbed power of fey queer refusal/a sideways tactical advantage/you really don’t understand how dangerous we are, do you?

And lastly a couple quotes from The Fever by Megan Abbott, which I happened to be reading last week. I think these quotes jumped out at me because of Alton Sterling’s +Philando Castile’s murders, watching/listening to Ty Dolla $ign’s song “No Justice” that he recorded with his brother TC (watch/listen here)… Something about how these events, this ongoing violence and injustice makes me feel came through in these words:

“Gabby paused. Then her voice dropped low, like she was right there beside her. ‘There was this shadow’, she said. ‘I could see it from the corner of my eye, but I wasn’t supposed to look at it.’

Deenie felt her hand go around her own neck.

‘If I turned my head to look’, Gabby continued, ‘something really bad would happen. So I couldn’t look. I didn’t dare look.’

Deenie pictured it. That smile on Gabby’s face. After, when everyone surrounded her on the stage. Like something painted on her face. A red-moon curve.

‘I didn’t look, Deenie’, Gabby whispered, ‘but it happened anyway.’

That smile, not a real thing but something set there, to promise you something, to give you a white lie. “

“‘She didn’t faint,’ Deenie said. ‘But her body. What was happening to her body?’

The pensive look on Deenie’s face, like when she was small. Finding a cat drowned in the ditch by the mailbox. He didn’t know how long she’d been staring at it, her brother next to her touching it gently with a stick, hoping to nudge it to life. That night she’d had nightmares, her mouth was filled with mud. He’d tried to explain it to her, how accidents happen but we really are safe. But there was already the sense that nothing he said touched what was really bothering her, which was the realization that you can’t stop bad things from happening to other people, other things. And that would be hard forever. He’d never quite gotten used to it himself.”

“Bad things happen, and then they’re over, but where do they go? Deenie wondered, watching Gabby. Are they ours forever, leeching under our skin?”